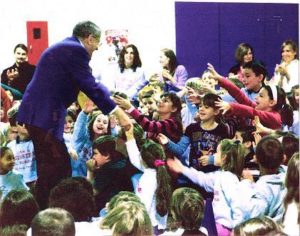 For the 12th consecutive year, Food on Foot will be participating in The Feinstein Foundation’s Annual $1 Million Giveaway to Fight Hunger. The more donations Food on Foot receives before April 30, 2014 in response to this challenge, the more Feinstein money Food on Foot will receive! Feinstein’s previous $1 Million challenges to fight hunger have raised a record $1.5 Billion for hunger-fighting charitable organizations nationwide that help the needy. Your donations connected to this campaign makes them a part of one of the most successful ongoing efforts ever to fight hunger. To learn more about how the $1 Million Giveaway to Fight Hunger works, please visit their website at FeinsteinFoundation.org.