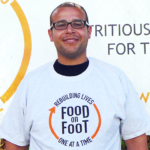 Herbert M. grew up on the LA streets and was involved with gangs and drugs during his teens and early twenties.  After becoming homeless, he enrolled in Food on Foot’s Work for Food program and turned his life around.  He now has a full-time job, housing he can afford and has also gained weekend custody of his son.

“If someone lends you their hand, you have to appreciate it and keep that same door open for other people.”  – Herbert M